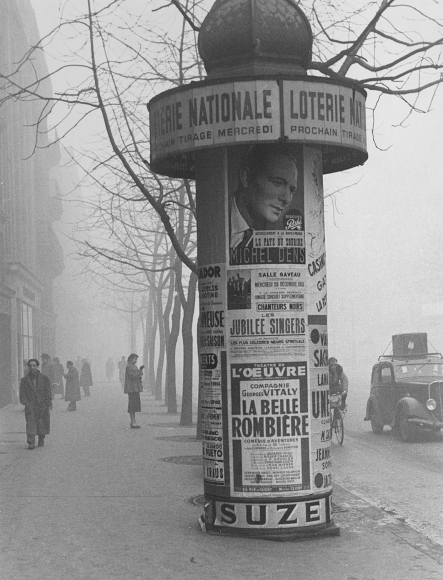 Todd Webb was an American photographer known for documenting everyday life and architecture in cities such as New York City, Paris as well as from the American west. was born in Detroit in 1905 and grew up there and in a Quaker community in Ontario.

Having been a successful stockbroker in the 1920’s, he lost all of his earnings, and then some, in The Crash. During the Depression, Webb prospected for gold, worked as a forest ranger, and wrote short stories that had gone unpublished. It was during this exploratory period in the 1930s that he first picked up a camera. His interest and love for photography soon crowded out his writing ambitions, and he was able to do the two things he loved the most: travel, meet people, and photograph them.

In 1938 Webb joined the Chrysler Camera Club in Detroit, where he met aspiring photographer Harry Callahan. Through a workshop from Ansel Adams, Webb’s interest in the sharp focus technique of “straight photography” was confirmed.

After serving in World War II, Todd Webb moved to New York where he nurtured a friendship with Alfred Stieglitz and his wife Georgia O’Keeffe and Minor White.

In New York, Webb began a project of walking the streets of New York City with his heavy camera and tripod and photographing people and buildings he encountered.  What set these photos apart was their “straightforward, descriptive clarity” even though they were often of familiar views. One large 10–foot–long panorama photograph which was critically acclaimed showed a section of Sixth Avenue from 43rd–44th streets which, in 1991, was seen as a “visual time capsule of the city” and was described as a “stunner.”

Webb’s photos reflected the photographer’s sense of discovery and captured the times, such as photos of hand-painted banners over apartment house doors saying “Welcome Home, G.I.s”.  In one photograph, Webb went to the top of the RCA Building and shot south using a backlit technique, which captured the Empire State Building at night.

The best photographs, according to New York Times art critic Charles Hagen, contained the “simple geometries of urban architecture” in a “simple elegance”; Hagen thought Webb’s New York City photographs were his best. In 1946, he had his first solo exhibition of his photographs at the Museum of the City of New York.

Georgia O’Keeffe introduced him to Beaumont Newhall, and later Newhall curated the first major exhibition of Webb’s photographs for The Museum of The City of New York. Also during this time, Todd worked for Roy Stryker and the Standard Oil Company.

In 1947, Webb was hired by Fortune magazine and he worked with professional photographers funded by the Standard Oil Company led by Roy Stryker and the group included notable photographers such as Sol Libsohn.  According to the New York Times, the team of professional photographers was “given amazingly free rein by its corporate sponsor” to produce a documentary about oil. One of these photographs, Webb’s Pittsburgh Panorama (ca. 1950) shows a grim industrial view towards Pittsburgh from a hill near Westinghouse Bridge that takes in a bare river valley across which snake highways and railways and a row of tall smokestacks in the distance. Curator Edward Steichen selected it for the 1955 Museum of Modern Art exhibition The Family of Man, seen by 9 million visitors on its world tour.  However, in his memoir, Webb records his disappointment with the way images were “over-enlarged to billboard size” losing “all the qualities that make photographs unique.”

In 1949 Todd Webb returned to Paris, and met his wife Lucille, remaining in France for the next four years. In Paris, Webb produced a “vivid record” of the city which earned him recognition. In both 1955 and 1956, Todd Webb was awarded two successive John Simon Guggenheim fellowships to photograph the pioneer trails that early America settlers followed to Oregon and California. While his contemporary, Robert Frank drove across the country during these years, Todd walked and photographed as he moved from East to West.

Up until the 1980’s, Todd Webb photographed and produced a unique body of work, which has attained an important place in the annals of American photographic history. Frequently referred to as “an historian with a camera,” Webb’s rich images document life all over the world. His work has been exhibited nationally and internationally, and is included in numerous museum collections including the Museum of Modern Art, the Metropolitan Museum of Art, the Minneapolis Art Institute, and the Chicago Art Institute.

Todd Webb died in May, 2000 at the age of 94 in Central Maine.  His life was like his photographs; at first they seem very simple, without obvious tricks or manipulation, but upon closer examination, they are increasingly complex and marvellously subtle.

His photography has been compared with that of  Harry Callahan, Berenice Abbott, Walker Evans, and the French photographer Eugène Atget. He also photographed famous people including Dorothea Lange and Georgia O’Keeffe. Webb’s photos of his friend Georgia O’Keeffe suggested not only a “loner, severe figure and self-made person” but that there was an intense connection between Webb and O’Keeffe.  While O’Keeffe was known to have a “prickly personality”, Webb’s photographs portray her with a kind of quietness and calm suggesting a relaxed friendship, and revealing new contours of O’Keeffe’s character.

Please click here to find more images from his archive.

His life was like his photos in the sense of being seemingly simple, straightforward, but revealing complexity and depth upon a closer examination. Capturing history, his pictures often transcend the boundary between photography and artistic expression.