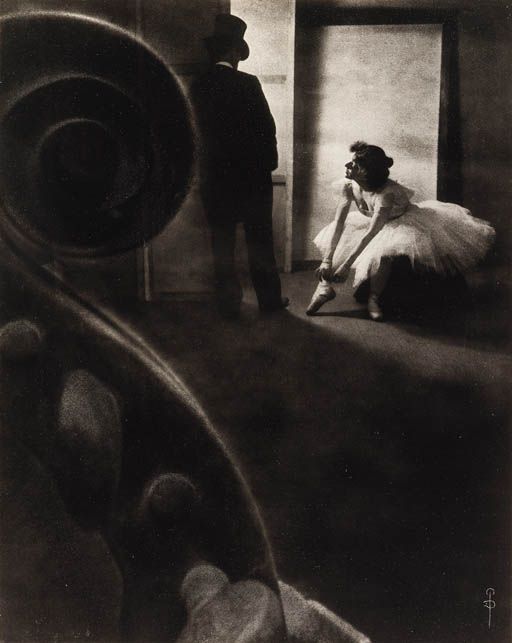 “Chance is the enemy of the photographer.” – Pierre Dubreuil

Pierre Dubreuil  was a French photographer, who spent his career in France and Belgium. As a pioneer of modernist photography, Dubreuil embraced innovative techniques and ideas that were celebrated, criticised, and at times, overlooked. Over the course of his career, which was interrupted by both World Wars,).

Born into a wealthy mercantile family in Lille, Dubreuil was a “gentleman photographer” and a prominent figure in European Pictorialist circles at the turn of the century. In 1888 he joined the Jesuit College of Saint-Joseph in Lille and started to take pictures with a half-plate camera aged sixteen. After serving for three years in the Saint-Omer Dragoons he started working with the photographer Louis-Jean Delton, who was specialising in horse subjects. In 1891 Pierre Dubreuil became a member of the Lille Photographic Society. There he met Robert Pauli who initiated him to the carbon and platinum printing techniques.

Dubreuil’s recognition first came in 1896, when his Sombre Clarté (“Dark Clarity”) was shown in Brussels. Subsequently, Dubreuil exhibited five prints at the Photo-Club de Paris, and by the turn of the century was internationally acclaimed, even upstaging Constant Puyo and Robert Demachy, the major figures of the Photo-Club de Paris. By the turn of the century, 39 of Dubreuil’s works were featured in Annuaire General et International de la Photographie, and German critic Fritz Loescher praised Dubreuil in Photographische Mitteilungen.

In 1903, Dubreuil was admitted as a member to the Linked Ring Brotherhood in London. This put Dubreuil among the ranks of Alfred Stieglitz, Edward Steichen, F. Holland Day, Frederick H. Evans, and Gertrude Käsebier. In 1904 he began using the bromoil process, which he favoured until 1930. This versatile process gave Dubreuil the freedom to control contrast and darken and lighten portions of prints at will. He took this new printing process to Paris, where he was influenced by Cubism and Futurism; he became one of the first photographers to explore Modernism in the medium, preceding Alvin Langdon Coburn’s “The Octopus” (1912) and the Modernist works of Paul Strand.

In 1910 Dubreuil sent Alfred Stieglitz twelve prints to be considered for Camera Work. Though none were published, six of the prints were exhibited alongside works of other Pictorialists at the International Exhibition of Pictorial Photography at the Albright Gallery in Buffalo, New York. In American Photography, critic F. Austin Lidbury wrote that the stand-out of the exhibition was “six extraordinarily interesting examples of Dubreuil’s original, if distorted way of looking at things.”  In 1912 Dubreuil again implored Stieglitz, sending him five exceptional prints (“Notre Dame de Paris,” “Eléphantaisie,” “Grand Place Brussels,” “Mightiness,” and “Cascade, Place de la Concorde”). Although Stieglitz did not include the works in Camera Work.  Stieglitz was known for not including more avant-garde and Modernist works in the publication.

While many of his fellow Pictorialists favoured pastoral or allegorical subjects, Dubreuil embraced the modern machine age. He is considered one of the early modernists, photographing the urban landscape from unexpected perspectives (birds eye) as well as making close-ups of the machine as an emblem of the modern era. An influential figure in the development of the “New Photography,” he consistently emphasised design and idea rather than content. He experimented with a range of printing techniques (e.g. platinum, gum bichromate and the carbon process) but from 1904 he settled on Bromoil printing. His work often involved non-traditional compositional devices, giving greater importance to what might be considered the more mundane elements of the image. His work was considered to be influenced by Cubism, Futurism and Surrealism.

Dubreuil lived in Paris from 1908 to 1910 and the First World War disrupted Dubreuil’s career, family, and ties to Lille. By 1923, when he re-emerged into the photo world, the “Golden Age” of Pictorialism was over. In 1924 Dubreuil moved to Brussels, where he incorporated new influences into his work: Belgian surrealism, James Ensor, and the de Stijl movement in Holland. In Belgium, elements of fantasy and dreams, abstract design, and deceptions based on scale permeated Dubreuil’s later work. Though Dubreuil’s work, like the work of many of the Late Pictorialists, was at times derided, his originality and adventurous work led to his election as a member of the London Salon, the most highly regarded artistic photographic society at the time. By 1935, Dubreuil had attained such stature that the Royal Photographic Society in London sponsored a retrospective exhibition of some 150 works by the then 63-year-old photographer. After 1935, though producing no new work, Dubreuil remained active in the photographic world as president of the Association Belge de Photographie et Cinematographie.

Sickness and poverty led him to sell his archives to Gevaert in 1943 although this lead to their loss when the factory was bombed during the war.

He became president of the Association Belge de Photographie in 1932 and his career culminated in 1935 when he was honoured with a retrospective at the Royal Photographic Society in London. After his death in 1944 his work was largely forgotten until 1988 when interest in Dubreuil was revived by Tom Jacobson, a San Diego photographer, collector and dealer who sought out surviving examples of his photographs in Europe. Drawing upon these rediscovered images, an exhibition of Dubreuil’s work was organized by the Centre Georges Pompidou, Paris (1988).

In 1924 he continued his experimental photographic work exploring fragmented images and close-ups, but he returned to France before he died.