Ruth Robertson was an American photojournalist and an explorer. Born in 1905, she started in 1939 at The Journal Star where she was the first female photographer. After convincing the editor to try something new, Ruth’s creation, Peoria and Her People, quickly gained popularity, and established her credentials as a writer and photographer.

Constantly searching for greater challenge and a better story, by 1942 she had joined Acme Newspictures (later United Press International) in Chicago, as news editor, where she met newspaperman Art Neumann, General Manager UPI Midwest.  After opening the Acme/St. Louis Bureau for Neumann in 1944, and acting as its Bureau Manager, Ruth joined forces with Neumann to form their own bureau, Press Syndicate.

By 1944, many male news photographers had followed MacArthur into the Pacific, leaving the field wide open for ambitious photojournalists like Ruth. She rose to the challenge, winning plum assignments such as the 1944 Republican and Democratic National Conventions, both held in Chicago that year.

In 1945, through Press Syndicate, Ruth applied for war correspondent status and was one of three assigned to the Alaskan-Aleutian area, Ladd Field in Fairbanks.

She photographed U.S. and Russian military movements, and found time to photograph native peoples as well. Ruth was a newspaper woman to the core and was prepared do just about anything to get a good story. At a moment’s notice she would hop a flight to any destination. She spent hours in freezing cold bomber sites, trying to get the perfect shot. One shot she was particularly proud of is one that took 40 trips to capture hanging out an open bay of a B-24. It is of Big and Little Diomede, two islands separated by the international date line and the U.S./Russian boundary. Robertson traveled the 2,000-mile Aleutian chain of islands to the HQ of the 11th Air Force and flew with pilots who were bombing the Japanese Kuriles, escaping unhurt when a fighter plane she was in took a direct hit.

On a flight to the North Pole she met and photographed the famous explorer Vilhjalmur Stefansson. On another she photographed the home and progeny of Charlie Brower, member of New York society, friend to explorers, and to whose home Will Rogers and Wiley Post were flying when they crashed. With the Seabees, she watched as the first oil on Petroleum Project No. 4 came in at Point Barrow.

Ruth specialised in photo-documentary – notably the Matanuska Valley Cooperative – a method by which the U.S. Government “colonised” Alaska. Another major focus was the Lend Lease Act, tracing the operation from Great Falls, Montana straight through to the Bering Strait. This feature received wide acclaim in FlyingMagazine in 1945.

After the war Ruth landed at the New York HeraldTribune, writing features for its “This Week Magazine.” But after her Alaska adventures, Ruth’s friend, Clayton Knight invited her to meet him and a group of Venezuelan pilots at Tim Costello’s Bar under the Third Avenue El. Over dinner one of the pilots asked Ruth to consider going to Venezuela to do some articles for U.S. papers on the new American pilots the airlines were hiring.

Ruth found Venezuela a mainly unexplored country, full of untold stories and unphotographed marvels. No sooner had she unpacked when she was greeted with a revolution. Then, in less than two weeks she started to see the dissolution of the big plans at Linea Aeropostal Venezolana. While the newly hired pilots were negotiating for severance pay and transport back to the U.S., Ruth negotiated for something else. She envisioned hundreds of places to be seen, stories to be written and photographs to be taken. The severance deal she cut was for freedom to fly between New York and Caracas for a year to sell her work. 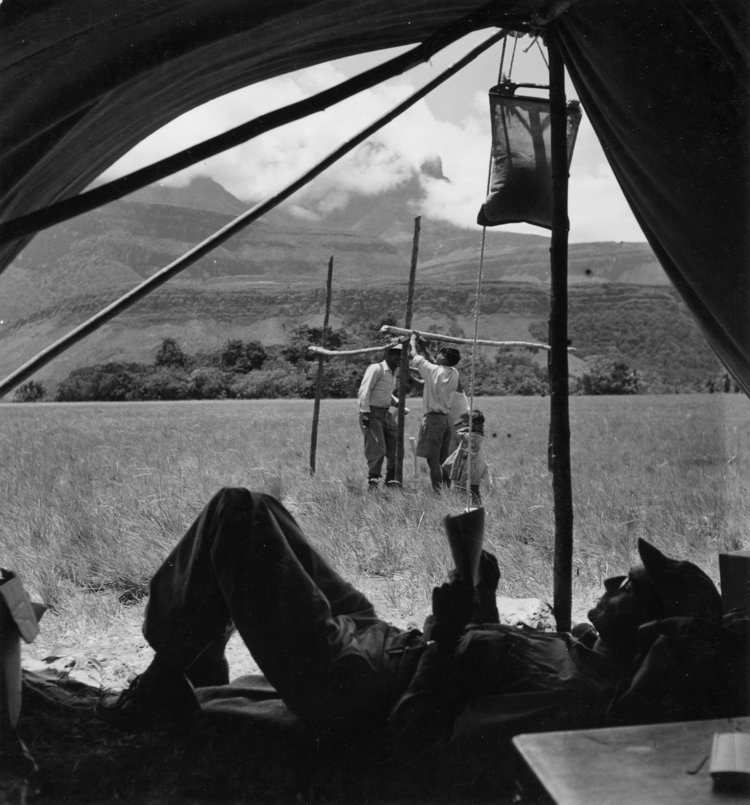 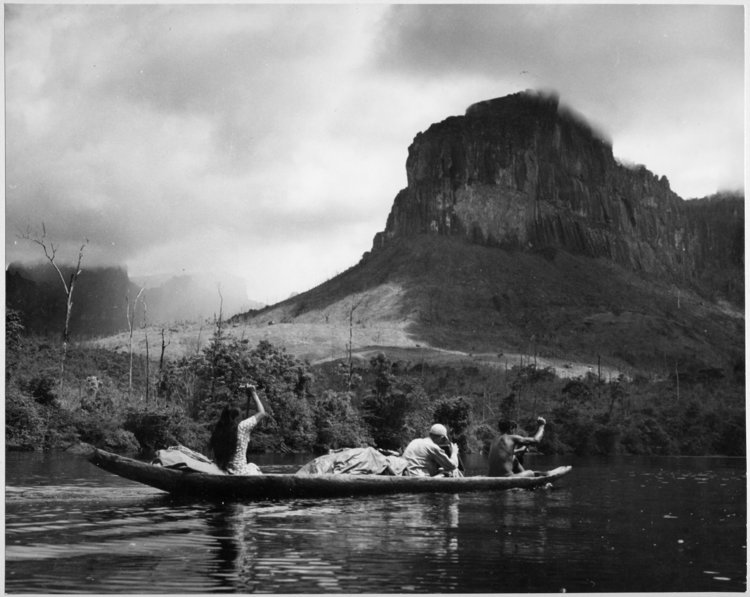 In her book, Churun Meru – The Tallest Angel, she wrote: ”

…here was a whole chunk of the northern part of this continent to be explored and articles to be written and photographs to be taken and marketed in U.S. magazines.  I felt confident, after my successes in Alaska the year before that the frontier countries were where the good stories were to be found.”

She was soon hard at work off the coast of Venezuela doing a film on pearl diving for the Venezuelan Ministry of Development. Then she secured a contract with Shell Pipeline Company to make a film about building a pipeline under Lake Maracaibo. For Shell and Creole Oil (Standard Oil) she produced colour calendars, documenting their oil fields and drilling operations around the country, and wrote and illustrated articles for their magazines. In 1947, on a flight into the remote jungle interior below the Orinoco River, Ruth saw Angel Falls for the first time.

Launching this expedition was a challenge of considerable magnitude, both logistically and financially. Never having planned, nor led, an expedition, Ruth approached who she felt would have the most obvious interest, National Geographic. They turned her down flat. The reason: four expeditions had previously tried to reach the falls and failed, some members never returning. What chance would she have, a woman.  Her only solace was an agreement to look at her story if she happened to succeed.

After two years of meticulous planning, on April 23rd, 1949 the expedition to Angel Falls got underway. It was decided that the tiny band would travel by DC-3 to a staging area in the Gran Sabana, in the Valley of Kamarata, and from there travel one at a time by Cub Cruiser (piloted by Ruth’s friend Oley Olsen/bush pilot), to a point where the group would be met by Alexander Laime, a Latvian ex-patriot, who had done some scouting in the jungles along the Churun and Caroni Rivers. Laime would hire Kamaracoto Indians (native to that area) to act as porters and guides.

Traveling by dugout and by foot to the base of the falls, Ruth’s mission was two-fold: first, to measure the falls to determine once and for all if it was the highest in the world, and second, to get the first photographs of the highest waterfall in the world — from the ground. The results of her adventure were printed in National Geographic, November 1949. Further accounts appeared in Time and Newsweek as well as every major newspaper in the world.