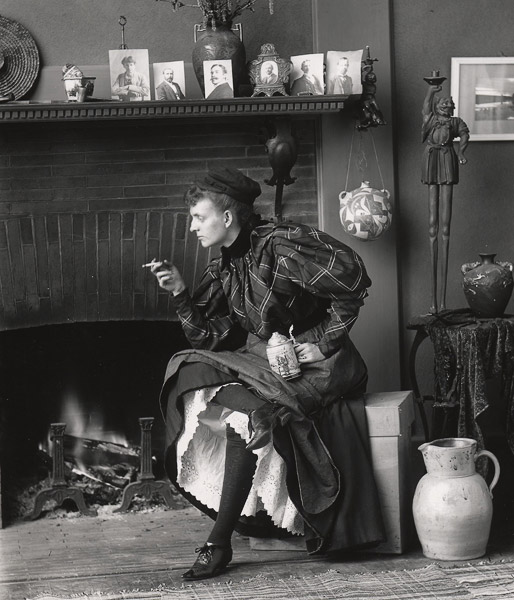 Frances Benjamin Johnston (1864-1952) was born during the American Civil War. Her  career as a photographer began with portrait, news, and documentary work then turned to a focus on contemporary architecture and gardens, culminating in a survey of historic buildings in the southern United States.

In the 1880s, Johnston studied art in Paris and then returned home to Washington, DC, where she learned photography. She quickly established a national reputation as a professional photographer and businesswoman, with growing success in both the art and commercial worlds.

Johnston counted presidents, diplomats, and other government officials among her portrait clients, while in her personal life she travelled in more Bohemian circles.

From the 1890s to the early 1900s, as one of the first photojournalists, she provided images to the Bain News Service syndicate and wrote illustrated articles for many magazines. Her active roles in pictorialist photo exhibitions and world’s fairs reflect her high level of energy and determination as well as her exceptional photographic talent.

An interest in progressive education resulted in pioneering projects to document students at public schools in Washington, DC; the Tuskegee Institute in Alabama; the Hampton Institute in Virginia; and the Carlisle Indian Industrial School in Pennsylvania.

In the 1910s, Johnston began to specialise in contemporary architecture and landscape photography, working for a time with photographer Mattie Edwards Hewitt in New York City. Johnston also traveled widely in the United States and Europe to research and lecture about the gardens that she photographed.

By the late 1920s, Johnston turned her focus to the systematic photographic documentation of historic buildings in the South. She traveled thousands of miles by car to create the Carnegie Survey of the Architecture of the South, which aimed to help preserve both vernacular and high style structures. Her vivid building portraits appeared in exhibitions and illustrated several major books. In the 1940s, she moved to New Orleans where she died in 1952.

In 1894, she became the first woman to open her own photography studio in Washington, D.C. She was described by The Washington Times as “the only lady in the business of photography in the city.” Considered to be one of the first female press photographers in the United States, she took pictures of news events and architecture and made portraits of political and social leaders for over five decades. From early on, she was conscious of her role as a pioneer for women in photography, telling a reporter in 1893, “It is another pet theory with me that there are great possibilities in photography as a profitable and pleasant occupation for women, and I feel that my success helps to demonstrate this, and it is for this reason that I am glad to have other women know of my work.”

She participated in Alfred Stieglitz’s promotion of photography as fine art and photographed writers, educators, presidents and their families, from Benjamin Harrison through Theodore Roosevelt.  In 1899, the principal of the Hampton Normal and Agricultural Institute in Virginia commissioned Johnston to take photographs at the school for the 1900 Exposition Universelle in Paris. The Hampton Institute was a preparatory and trade school dedicated to preparing African American and Native American students for professional careers. Johnston took more than 150 photographs and exhibited them in the Exposition Nègres d’Amerique(American Negro Exhibit) pavilion, which was meant to showcase improving race relations in America. The series won the grand prize and was lauded by both the public and the press.

At the turn of the 20th century, garden photography evolved with professional landscape architecture. Johnston produced her first garden images while photographing The White House in the late 1890s. In 1903, she photographed the northern California ranch designed by Albert C. Schweinfurth for education reformer Phoebe Apperson Hearst. After featuring Johnston’s photographs of the Mission Revival house and garden in 1904, Country Life in America became the photographer’s lead publisher, followed in the 1920s by The Garden Magazine, The House Beautiful, House & Garden and Town & Country.

Recognising career opportunities in New York, a centre of publishing and architecture, Johnston moved to the city in 1909 after winning a commission to photograph Carrère & Hastings’ New Theatre. From 1909 until 1916 she worked and lived with Mattie Edwards Hewitt who began her photography career in St. Louis.

In 1917 Johnston ended her association with Hewitt. Both continued as independent photographers, living in New York and working on speculation and on commission from landscape architects and garden owners. Johnston travelled March through October in New England and the Midwest, to California in 1917 and 1923, and to the Middle East and Western Europe in 1925 where she photographed Italian Renaissance villas and the revivalist gardens of Americans Bernard Berenson, Elsie de Wolfe, and Nancy Astor. In the 1920s Johnston joined the urban garden movement as a member of The City Gardens Club of New York City and photographed newly renovated row house yards, notably Turtle Bay Gardens, for that project’s co-architect, Edward C. Dean.

While scouting for Town & Country in 1926, Johnston toured southern antebellum gardens undergoing restoration. Foreseeing opportunities for work, she moved back to Washington, D.C. in 1927. In that year and the next, she produced a photo survey of buildings and gardens in and around colonial Fredericksburg, Virginia, paid for by heiress Helen S. Devore, living at Chatham manor landscaped by Ellen Shipman. From this time through the Depression, Johnston transitioned from photographing gardens designed by local garden club members and landscape architects, including Rose Greely and Nellie B. Allen, to documenting southern architecture, in coordination with the Library of Congress.

In 1945, after a sixty-year career, Johnston retired to New Orleans. At her house along Bourbon Street, she designed and planted her only garden.

As one of the first professional garden photographers, Frances Benjamin Johnston helped define the practice and aesthetics of American garden photography. Her images, through publication, influenced American landscape design by both amateurs and professionals. Today, the Library of Congress preserves her house and garden print photographs and over one thousand lantern slides.

Years later, writer and philanthropist Lincoln Kirstein discovered a leather-bound album of Johnston’s Hampton Institute photographs. He gave the album to The Museum of Modern Art, which reproduced 44 of its original 159 photographs in a book called The Hampton Album, published in 1966.