Imogen Cunningham was an American photographer known for her photography of botanicals, nudes and industry. Born in Portland, Oregon. In 1901, at the age of 18, Cunningham bought her first camera, a 4×5 inch view camera, from the American School of Art in Scranton, Pennsylvania. She soon lost interest and sold the camera to a friend and it wasn’t until 1906, while studying at the University of Washington in Seattle, that she was inspired by an encounter with the work of Gertrude Käsebier to take up photography again.

With the help of her chemistry professor, Dr. Horace Byers, she began to study the chemistry behind photography; she subsidised her tuition by photographing plants for the botany department. 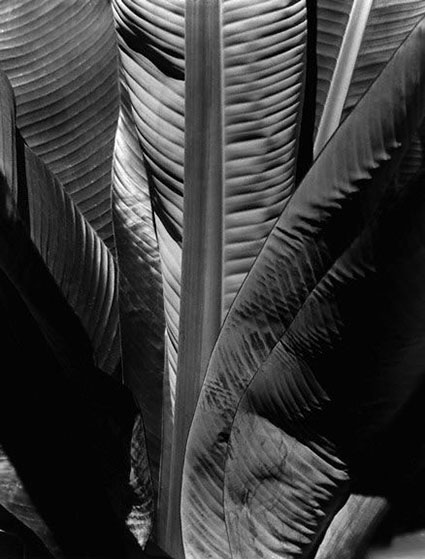 After graduating in 1907 she went to work with Edward S. Curtis in his Seattle studio. This gave her the valuable opportunity to learn about the portrait  and the practical side of photography. In 1909, Cunningham won a scholarship from her sorority for foreign study and, on advice from her chemistry professor, applied to study with Professor Robert Luther at the Technische Hochshule in Dresden, Germany.

While in Dresden she concentrated on her studies and didn’t take many photos. In May 1910 she finished her paper, “About the Direct Development of Platinum Paper for Brown Tones”, describing her process to increase printing speed, improve clarity of highlights tones and produce sepia tones. On her way back to Seattle she met Alvin Langdon Coburn in London, and Alfred Stieglitz and Gertrude Kasebier in New York.

Once back in Seattle she opened her own studio and won acclaim for portraiture and pictorial work. Most of her studio work of this time consisted of sitters in their own homes, in her living room, or in the woods surrounding Cunningham’s cottage. She became a sought after photographer and exhibited at the Brooklyn Academy of Arts and Sciences in 1913. In 1914 Cunningham’s portraits were shown at “An International Exhibition of Pictorial Photography” in New York and a portfolio of her work was published in Wilson’s Photographic Magazine. The next year she married Roi Partridge, an etcher and artist. He posed for a series of nude photographs, which were shown by the Seattle Fine Arts Society.

Although critically praised, wider society didn’t approve of such images and Cunningham didn’t revisit the pictures for another 55 years. Between 1915 and 1920 Cunningham continued her work and had three children with her husband.

In 1920 they left Seattle for San Francisco where her husband taught at Mills College. In San Francisco, Cunningham refined her style, taking a greater interest in pattern and detail as seen in her works of bark textures, trees, and zebras. She became increasingly interested in botanical photography, especially flowers, and between 1923 and 1925 carried out an in-depth study of the magnolia flower. Later in the decade she turned her attention towards industry, creating several series of industrial landscapes throughout Los Angeles and Oakland. Cunningham’s 1922 portrait of Margrethe Mather and Edward Weston

In 1929, Edward Weston nominated 10 of Cunningham’s photos (8 botanical, 1 industrial and 1 nude) for inclusion in the “Film und Foto” exhibition in Stuttgart. Cunningham once again changed direction to become more interested in the human form, particularly hands (and a further fascination with the hands of artists and musicians). 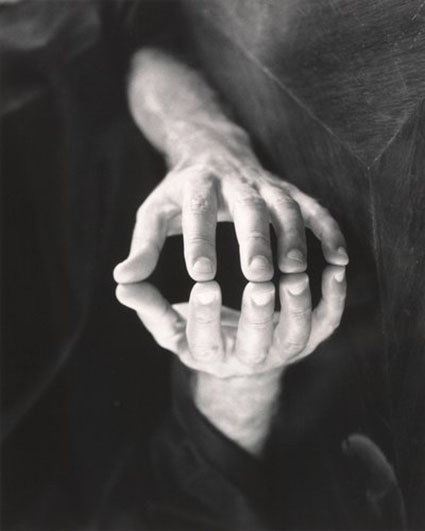 This interest led to her employment by Vanity Fair, photographing stars without make-up or false glamour. In 1932, with this unsentimental, straightforward approach in mind, Cunningham became one of the co-founders of the Group f/64, which aimed to “define photography as an art form by a simple and direct presentation through purely photographic methods”. In 1934 Cunningham was invited to do some work in New York for Vanity Fair. Her husband wanted her to wait until he could travel with her but she refused and they later divorced. She continued her work with Vanity Fair until it stopped publication in 1936. In the 1940s Cunningham turned to documentary street photography which she did as a side project while supporting herself with her commercial and studio photography. In 1945, Cunningham was invited by Ansel Adams to accept a position as faculty at the first fine art photography department at the California School of Fine Arts (CSFA). Dorothea Lange and Minor White joined as well. Cunningham continued to take pictures until shortly before her death at age 93 on June 24, 1976 in San Francisco, California.