Edward S. Curtis was an American self-taught photographer. He grew up in Minnesota, close to the Chipewa and Winnebago Indian tribes. He is is widely known for documenting Native American tribes culture.

By the age of 17, he was an apprentice at the St Paul studio until his family packed up and moved west, eventually settling in Seattle. There, Curtis married Clara Phillips, purchased his own camera and a share in a local photography studio. He initially worked providing society ladies with their portraits and it was in Seattle in 1895 that he took his first portrait of a Native American, that of the Princess Angeline, the eldest daughter of Chief Sealth of the Duwamish tribe. He paid her a dollar for each pose.

It was this chance encounter that has set him on a different path away from his studio. While photographing Mt Rainier he met some scientists that were lost, among the group was the expert on Native American culture George Bird Grinnell. They quickly became friends and he became the official photographer for the Harriman Alaska expedition.

For 2 months, Curtis accompanied two dozen scientists, capturing everything from glaciers to Eskimo settlements. He was then invited by Grinnell to visit the Pagan Blackfeet inMontana the following year.

In Montana, under Grinnell’s tutalage, Curtis became deeply moved by what he called “primitive customs and traditions” of the Piegan people including the Sun Dance that he had witnessed. This was the start of him learning about the Plains Indians and to photograph their lives. On his return to Seattle, he put together exhibitions, publishing magazine articles and then lecturing across the country.

His photographs became known for their beauty. President Roosevelt commissioned him to photograph his daughter’s wedding and to do some of their family portraits. However, he was itching to return to the West and seek out more more Native Americans to document. He found a replacement to manage his studio. He approached J.P. Morgan who initially turned him down but changed his mind after seeing his work. He then insisted in seeing them in books. Morgan sponsored Curtis in exchange for 25 sets of volumes and 500 original prints.  The $75,000 from Morgan was used to acquire equipment, interpreters and researchers for his expeditions.

Curtis then set out on a journey that would see him photograph the most important Native Americans of the time, including Geronimo, Red Cloud, Medicine Crow and Chief Joseph.

The trips were not without peril but Curtis managed to endear himself to the people with whom he stayed.

On wax cylinders, his crew collected more than 10,000 recordings of songs, music and speech in more than 80 tribes, most with their own language. With the tribal elders permission, Curtis organised reenactments of battles and traditional ceremonies among the Indians, that he documented which produced glass – plate negatives that yielded the crisp, detailed and gorgeous gold – tone prints he was noted for. The Native Americans came to trust him and named him “Shadow catcher”. 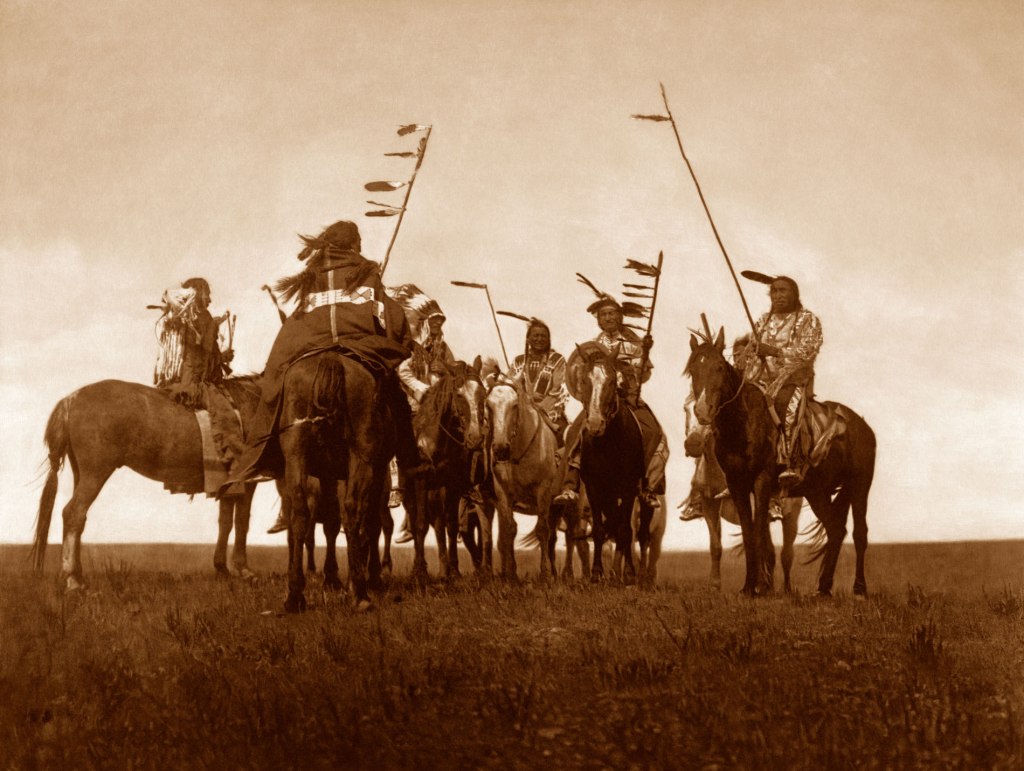 Just as he began to produce volume after volume of his books, J.P. Morgan died unexpectedly in Egypt in 1913. J.P. Morgan Jr contributed to his work but in a much smaller amount, and he was forced to abandon his field project.

While the onset of World War I coincided with a diminished interest in Native American culture, Curtis put together enough funds to make it big with a motion called In the Land of the Head Hunters. The film had some critical success but flopped and he lost his investments.

He then took work in Hollywood as a cameraman on films such as The Ten Commandments. He sold the rights to his movie to the American Museum of Natural History fo only $1500 and worked out a deal that allowed him to return to his field work by relinquishing his copyright on the images for the North American Indian to the Morgan company.

He later found out that the tribes he had visited had been decimated by relocation and assimilation. This made it even more difficult than ever to create the kinds of photographs he had in the past.

Curtis photographs represented ideals and images designed to create a timeless vision of the Native American culture at a time when modern amenities and American expansion had altered their way of life. By the time Curtis arrived in various tribal territories, the U.S government had forced Indian children into boarding schools, banned them from speaking their native tongues, and even made them cut their hair. However, Curtis did not document this. It was said that he went to great lengths to create images of Native Americans posing in their traditional clothing they had long put away. Images that were later retouched to eliminate any modern artefacts. Some critics accused him of fakery and advancing his career by ignoring the plight and torment of his subjects.

I believe that there’s always two sides to every story but as a photographer, it is easy to get tunnel vision once we are focused on a task. As an outsider, it easy to get drawn into a culture that is foreign to your and to capture just that. However, as we have learned from over the years, that as photographers it is our job to be the fly on the wall and to document stories to the best of our abilities and most importantly be the voice of our subject.

Through individuals like Edward S. Curtis, we don’t only learn of cultures and traditions that have long gone but also about sacrifice and lots of hard that is required to achieve goals.

If you are interested is seeing more of his work, his book can be purchased here. You can also find his website by clicking here.