Skip to content
One of men I admire is Brian Matiash. His dedication and love for photography can be seen in his work. I’ve only discovered his blog a short while ago but am in love with his work, the way he sees things and much more. Here is one of his posts that I thought I would share.
On Flowing With The Style
One question that I get asked more than most any other is, How do you know what you want to do to your image in post?
The answer is both straightforward and somewhat ambiguous, and is in no way intended to cause any sort of consternation. Basically, the path I take when I style my images varies on an image by image basis. I take the photo with my camera, import it into Lightroom and, when I’m good ‘n ready, I go to work on it.
The path of stylization for some images can be very clear whereas others take a lot longer to figure out. I don’t rush it and I’m not at all afraid to quit out of all programs without saving if I’m just not feeling good about what I’m seeing, even if I had been working the image for several hours. I also don’t really work in iterations – I start on an image and I work at it until it’s done. If the process breaks down midway and I lose inspiration, I stop and quit without saving. I’ll attack it again another day. The image isn’t going anywhere.
The process of stylizing an image like this one of Mt. Hood is one of my favorites. I opened this image up and have absolutely zero idea of what I wanted to do to it. In fact, I didn’t even think I wanted to ever work on it – just keep it on ice. But then, I applied one effect that changed the entire look and feel of the image and everything else instantly sprang together in a very harmonious way. As soon as that one effect was applied, the path became very clear to me.
And that is how things work in my head. No two images are treated the same way and I see no sense in rushing your own art. The only stipulation is that when you’re done with your art, you and only you are truly happy with it.
In terms of processing
This is a single, long exposure taken at Laurance Lake in Hood River, OR. Despite being flanked by some amazing photographers and friend, +Jay Patel, +Varina Patel, +Patricia Davidson, +Michael Riffle, and +Nicole S. Young, I felt totally at ease. When photographers come together with their intentions refined razor sharp, magic happens. Ideas and musings are shared with no pretense. It was amazing.
When I began working on this image, I really had no idea what I wanted for it. That is, of course, until I applied the Blue Dawn effect from +onOne Software Perfect Effects 3. The result here was a perfectly moody blue tint, with all traces of minute texture and details wiped away – giving the image an painterly feel. From here, I jumped into action.
I selectively applied a heavy amount of Tonal Contrast back onto Mt. Hood to bring out the details. I also applied the Rice Paper Light texture overlay, which added some nice fodder for the eyes in the negative spaces while also adding some nice warm swatches above and below the horizon.
Final touches were applied in Lightroom 4RC2. 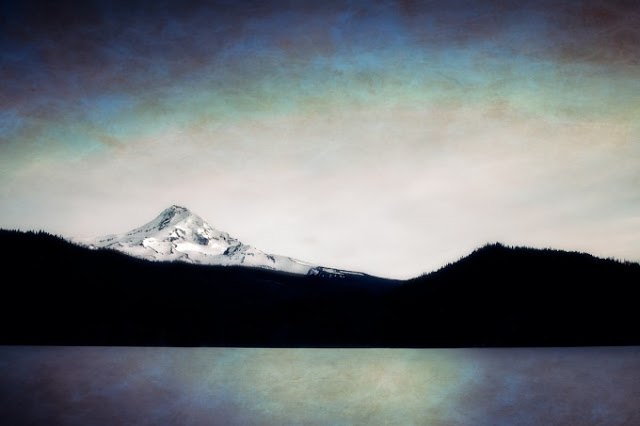